Daihatsu Hijets have been the #1 best-selling Japanese mini truck models for over a decade. So when you take the Hijet with the regular cab, and pair it with a tipping rear bed to create a powerhouse 4x4 off-road vehicle that can haul and dump 1500lbs, you can see why these models become so attractive to anyone from ranchers to municipalities as they really could be called the Swiss Army Knives of the mini truck world.

Now, on this page, we're going to focus on what makes these models different to the regular cab Hijets that have fixed load beds. So, if you want to know more about engines, transmissions, the interior, or anything else that these dump mini trucks have in common with the regular cab Hijets that have a fixed bed, then you won't find it here. If that's what you want to know, head over to the Hijet regular cab page here to find that information and more.

Now that's out the way, let's first take a look a the colors in which you can get your regular Hijet dump mini trucks.

These dump mini trucks are available in two standard colors -- white and metallic silver. Since these are almost always work, rather than personal vehicles, in Japan they're not sold in the exciting variety of colors (such as Orange Metallic or Ice Green Metallic) that are readily available on the fixed bed regular cab or Jumbo models. But that doesn't mean that they don't look good. Here's a couple, showing off the two color options of white and silver. 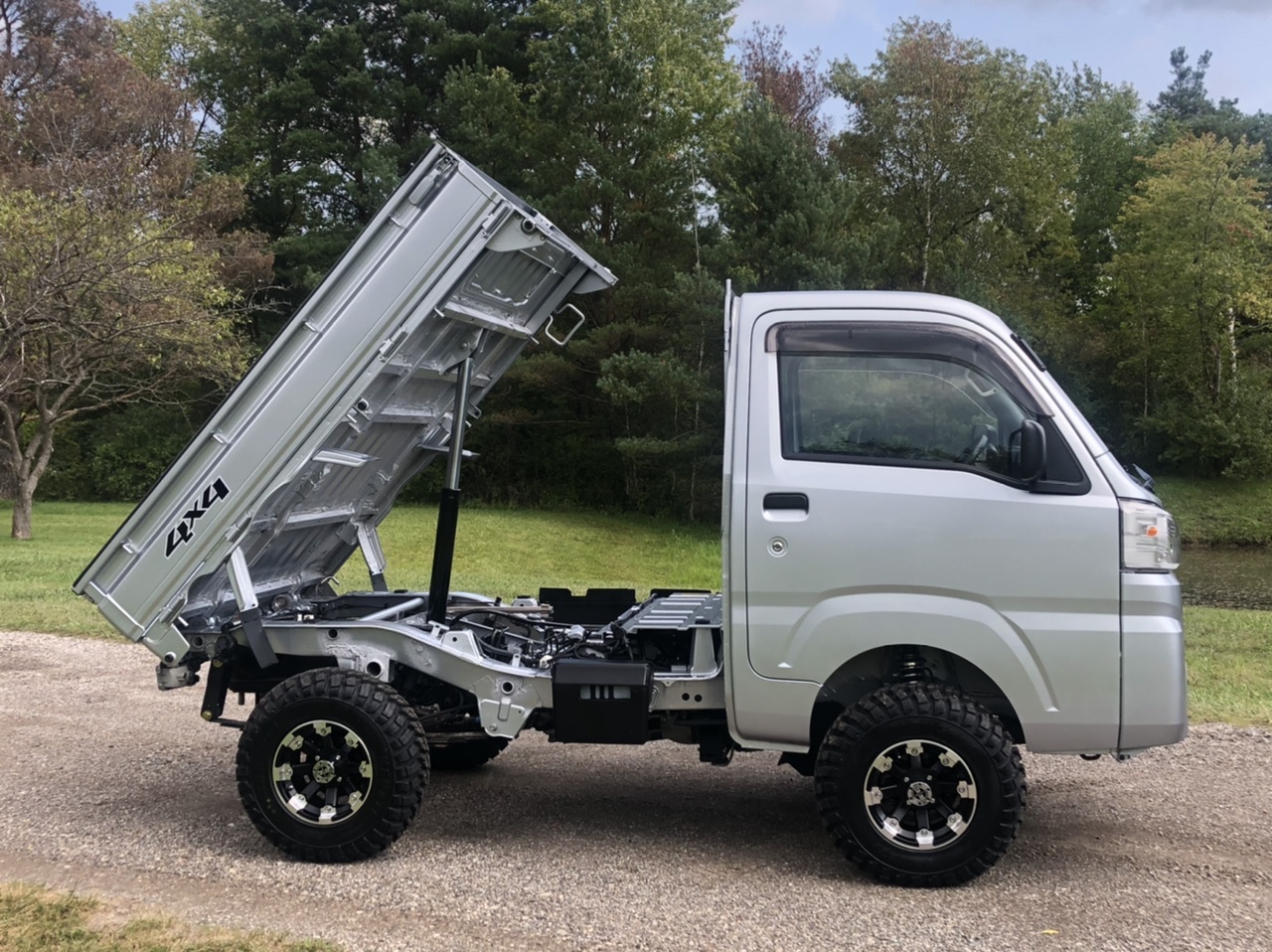 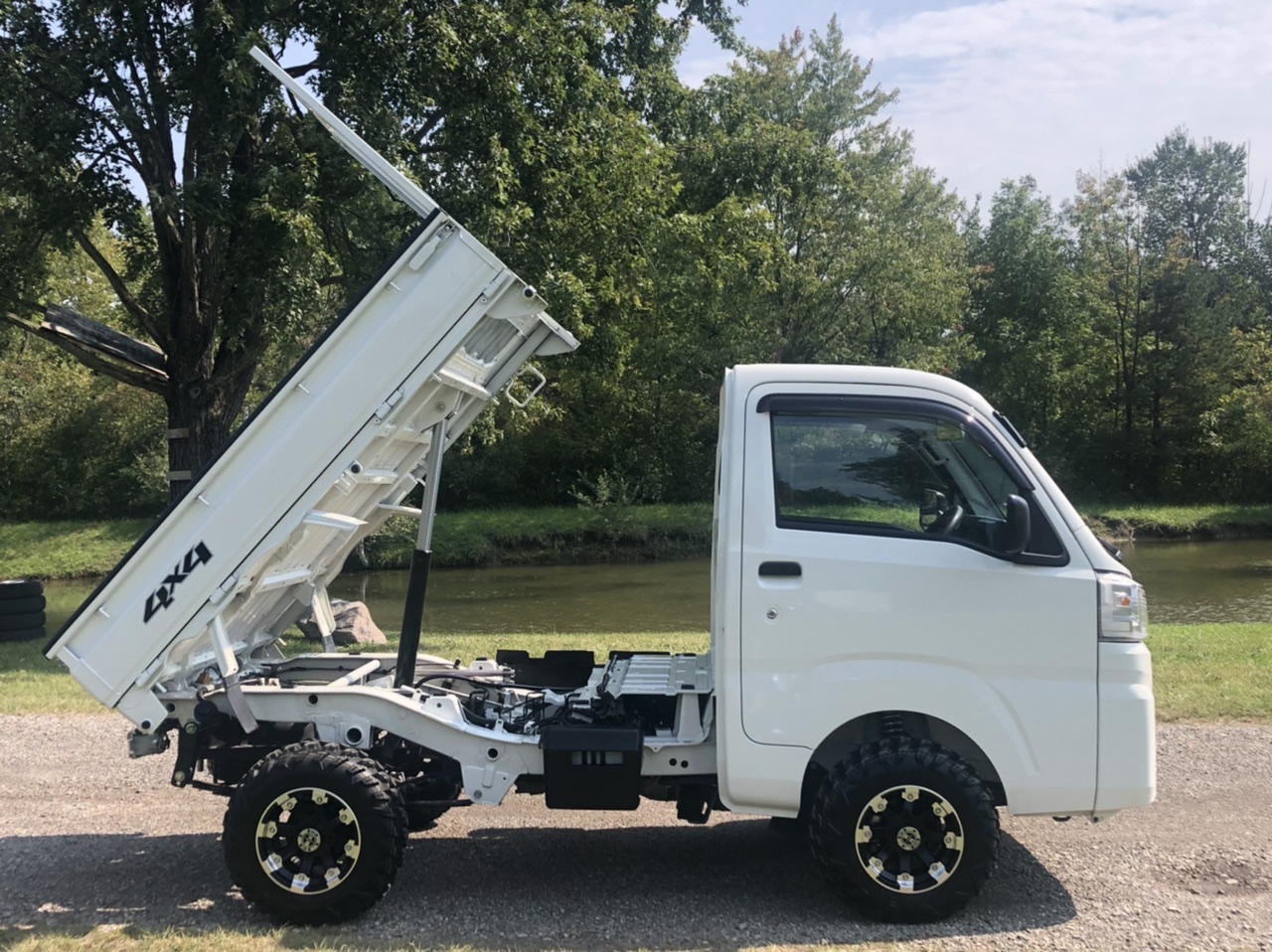 As you can see, both colors work well, but the silver is perhaps a bit more attractive, if that's what you're looking for. The thing is that the silver body color is only available on the Low Dump model, whereas white is good for both the Low and HD dumps.

So, what does this "Low" and "HD" really mean. What's the difference?

Whether a picture really is worth a thousand words, but it's the best place to start, so here's a 10th generation Hijet Low Dump model. 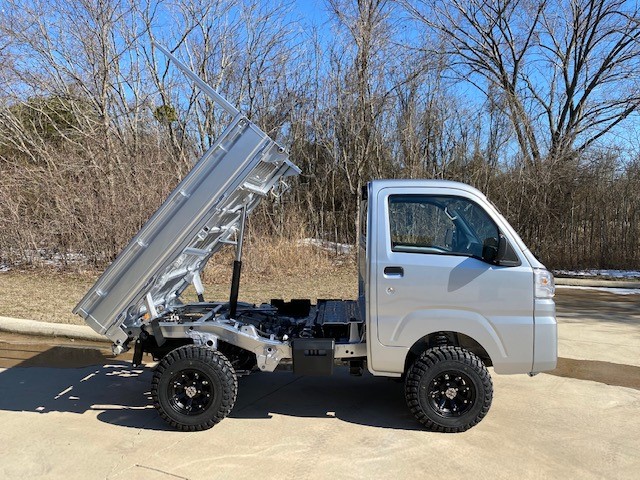 There's a couple of things to notice here. First of all, the dump bed is the same bed as you find on the regular cab model where it is fixed. So, it's the longest mini truck dump bed at 6 feet and 8 inches long. As you can see in the photo above, some like the one shown have a frame at the front of the load bed to protect the back of the cab. On other Low Dump models there is a frame that is fixed to the back of the cab to do the same job (such as you can see in the photo below).

And just as you might guess given how this Low Dump is related to the regular fixed bed model, it can also perform this great party trick of being able to flip down up to 3 sides to make loading and off-loading easier. 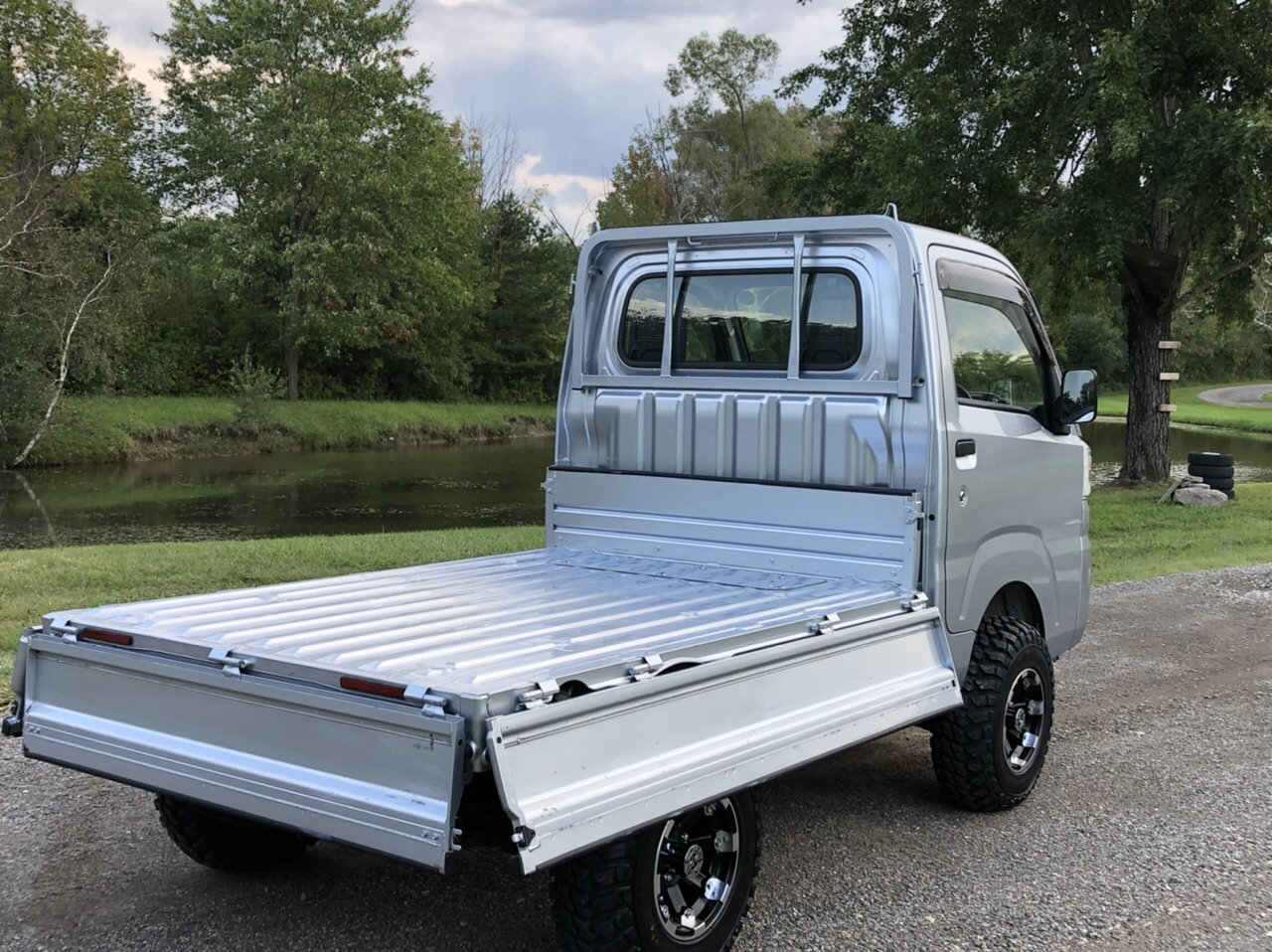 So the next question is how the bed is tipped. Unlike the HD version we will get to shortly, with this Low Dump, you can only choose the electro-hydraulic mechanism, not a PTO mechanism. What are you missing out on with the Low Dump. Do you really need the PTO mechanism?

Well, it comes down to what the difference is between them and how you want to use your dump mini truck: If you are going to be hauling a lot of heavy loads, such as gravel, and you really want to maximize the sheet lifting power of the tipping mechanism, then the PTO is for you. It draws the power directly from the engine which is why it's able to give the biggest kick.

The main disadvantage? In order to engage the PTO mechanism, the mini truck has to be stationary. (Because the power is going into dumping the load, so it can't be directed to the wheels at the same time.) But there are applications where you want to be able to raise the bed while the vehicle is in motion. A classic example would be the farmer who wants to spread feed out for his livestock. By gradually tipping the load bed as he drives slowly across his field, he can achieve a nice distribution, rather than a single pile.

It really is up to you. Think about what you're going to be using your dump mini truck for. Is it sheer power that you'll need? Or flexibility? Now we've thought about these options, let's look at what the hydraulic mechanism (the only option with the Low Dump model) looks like on the mini trucks themselves: 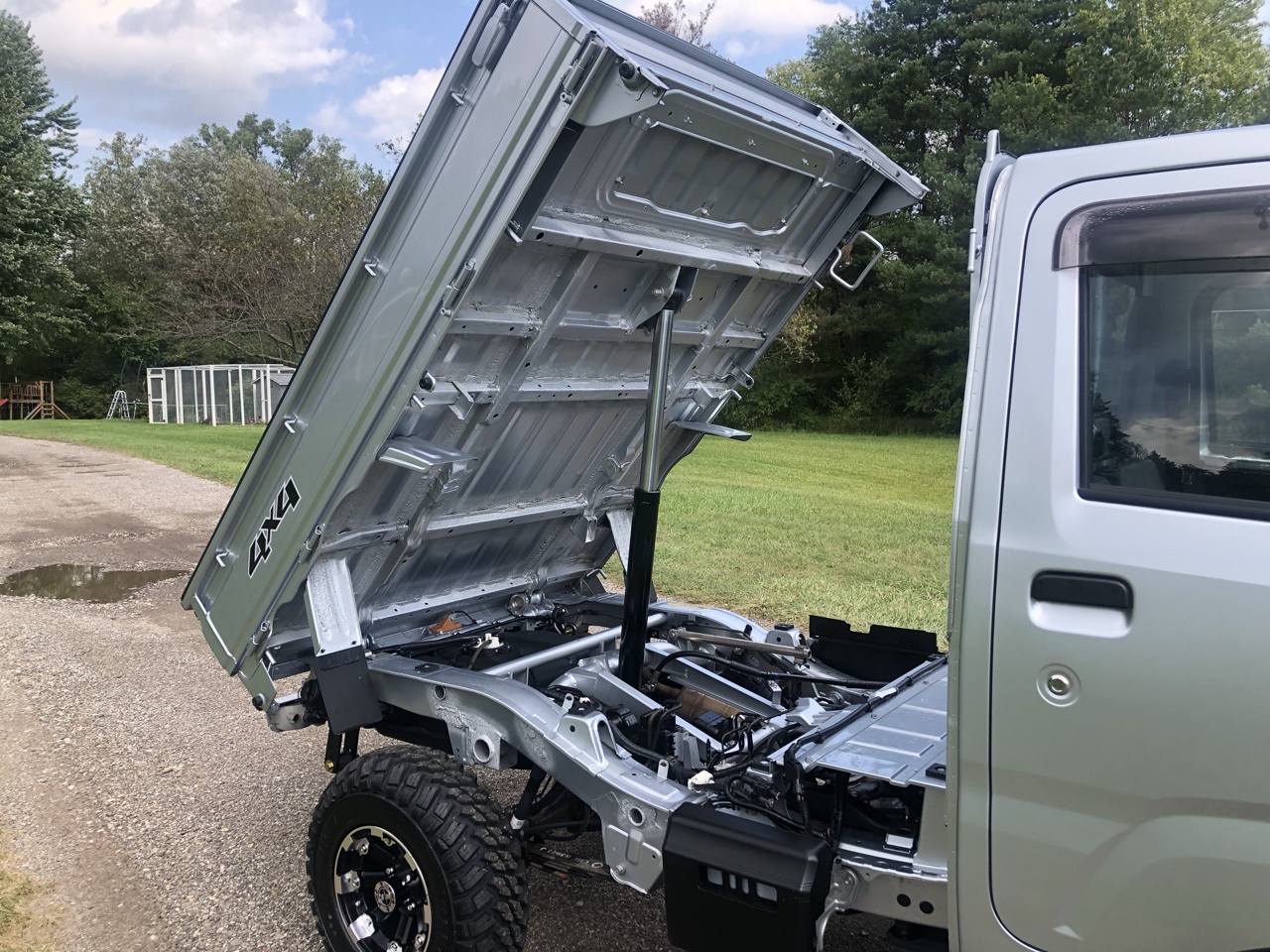 Before we even look at that dumping piston, check out the impressive, automotive grade frame this Hijet has. This is the quality of build you get with any Hijet model, but usually you can't see it as the bed is in the way. So this is a great chance to take a look at this and see just what a contrast this is with the tube frame of a UTV.

But we're not here to look at the chassis in particular. Let's pay attention to the load bed. Do you see what a steep angle it can be raised to? It can get up to around 50 degrees, which is more than steep enough to make sure the load is dumped out effectively.

When it comes to operation, it couldn't be easier. It's all done with the click of a button: 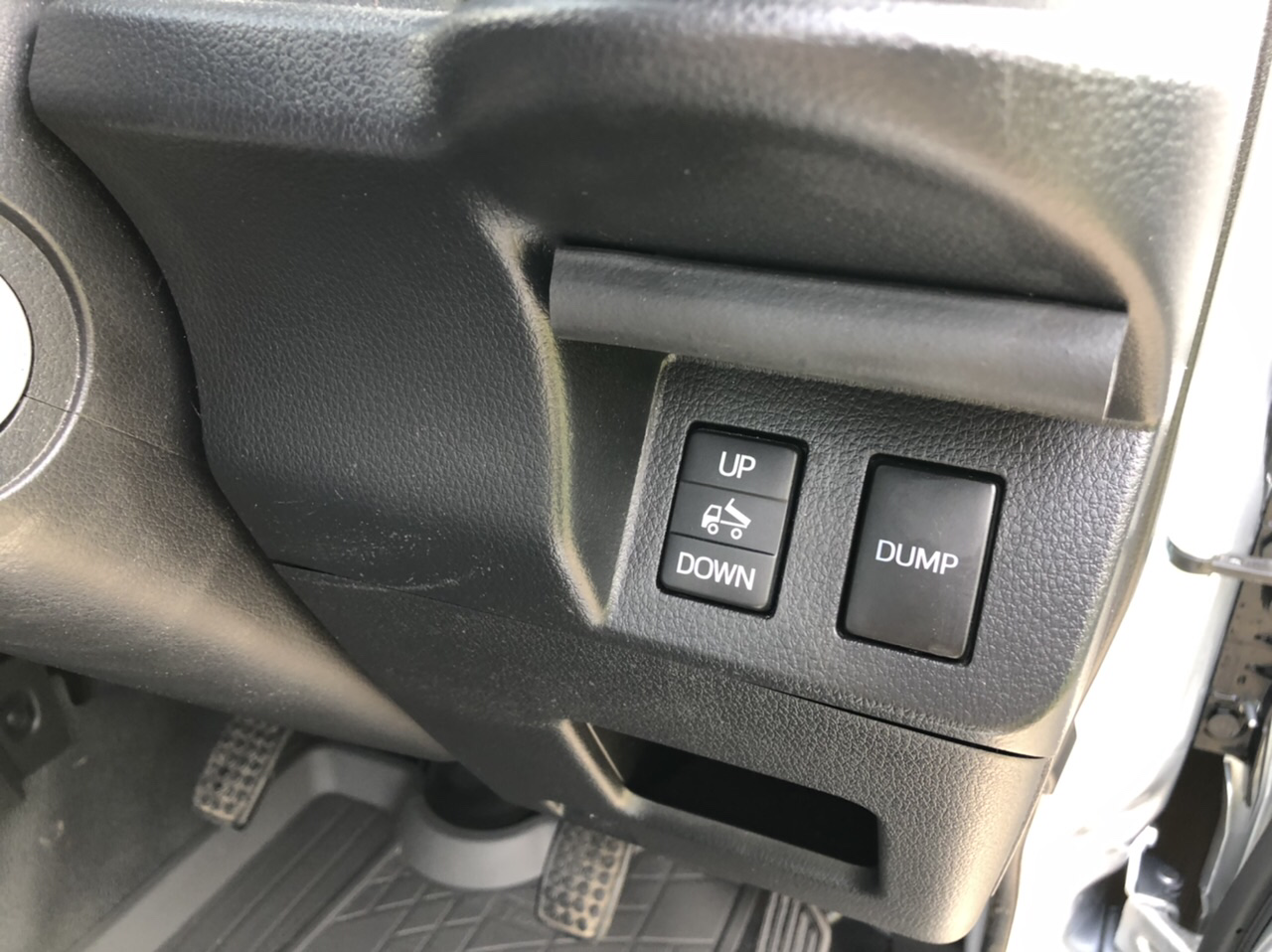 But what if you need a tougher bed and the most powerful tipper dumping mechanism on your Japanese mini truck? Then the HD Dump with PTO is for you. Let's look at that in more detail next.

In addition to having the option of a PTO mechanism rather than just a hydraulic mechanism, the other thing you will spot right away is the tougher design of the HD dump bed. Let's look at a photo so we can see the differences more easily. 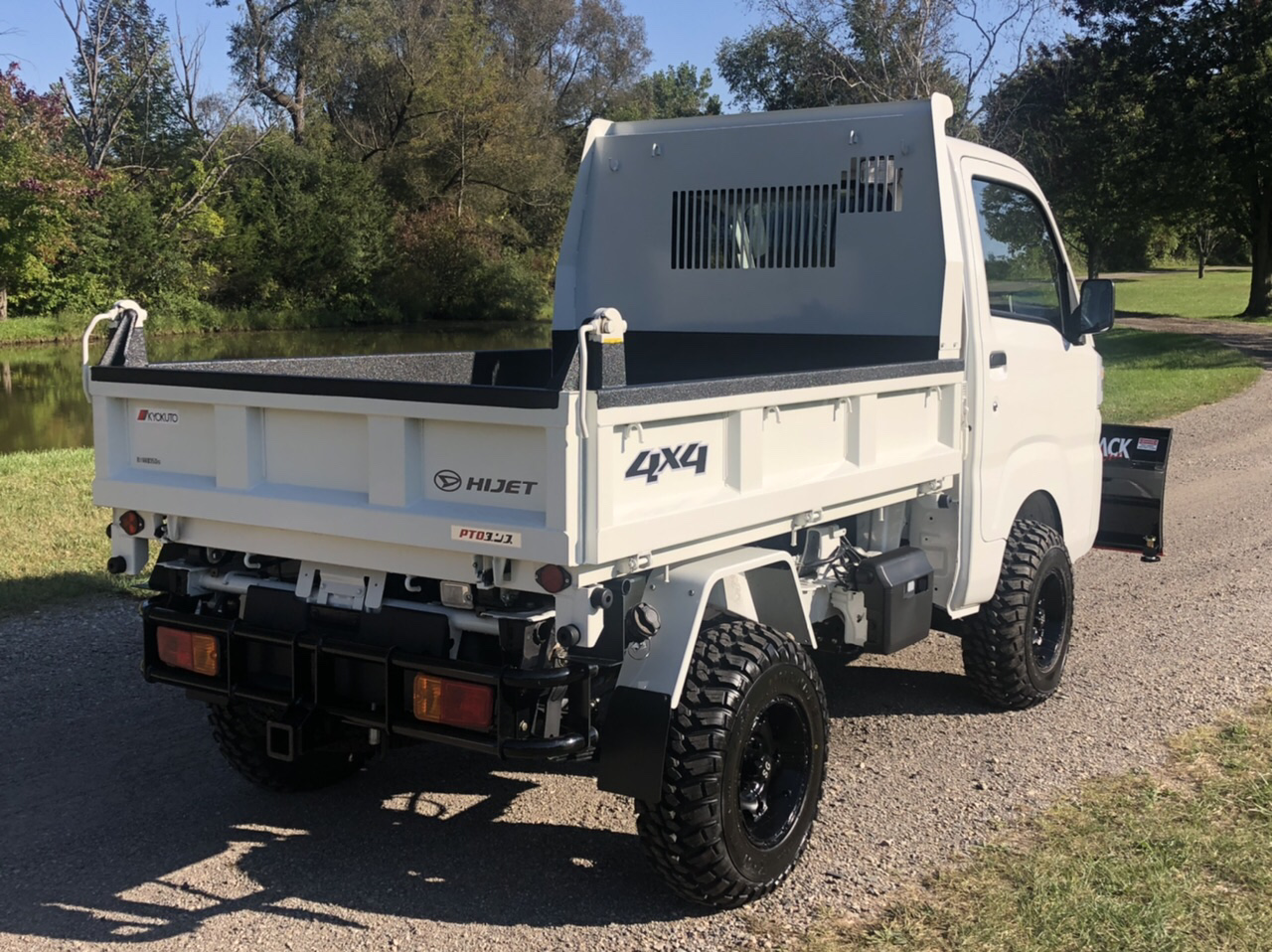 It's pretty clear that the HD load bed is built differently to that of the Low Dump. First of all, check out the protective plate at the front of the dump bed. It covers the rear of the cab almost completely, with just a few slits there where the rear window is. And look at the sides: Can you see the regularly spaced steel pillars? You won't find these on the Low Dump model at all, but these are the supports you need to keep the bed in shape when you have the heaviest loads.

The final difference isn't visible, but once more it is about strengthening the dump. The steel plates that form the sides and base of the dump bed are made with stainless steel that is a bit over 1/16 inch (2.3mm) thick.

But, despite having been built to a stronger spec than the Low Dump, it still has the user-friendly functionality -- particularly the sides that can fold down on each of the three sides for easy onloading and offloading.

One of the dump bed tilt mechanism options is the electro-hydraulic mechanism. But since we've already taken a look at that above, let's look at the PTO here. 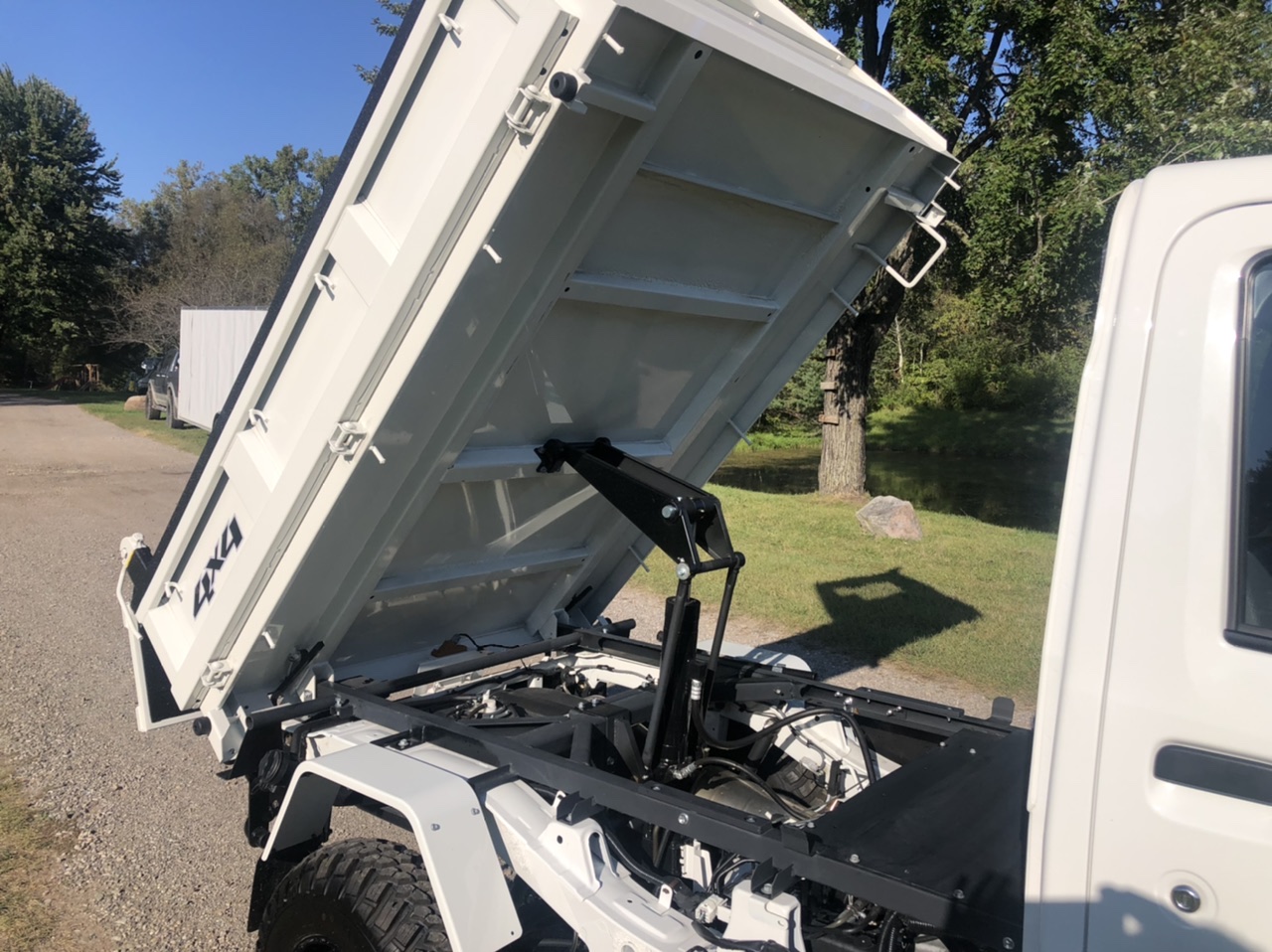 Check out the extra reinforcement both on the underside of the bed, and also the extra frame that connects the bed to the truck chassis. Of course, this strengthening is the same whether the mini truck has a PTO mechanism or an electro-hydraulic one. 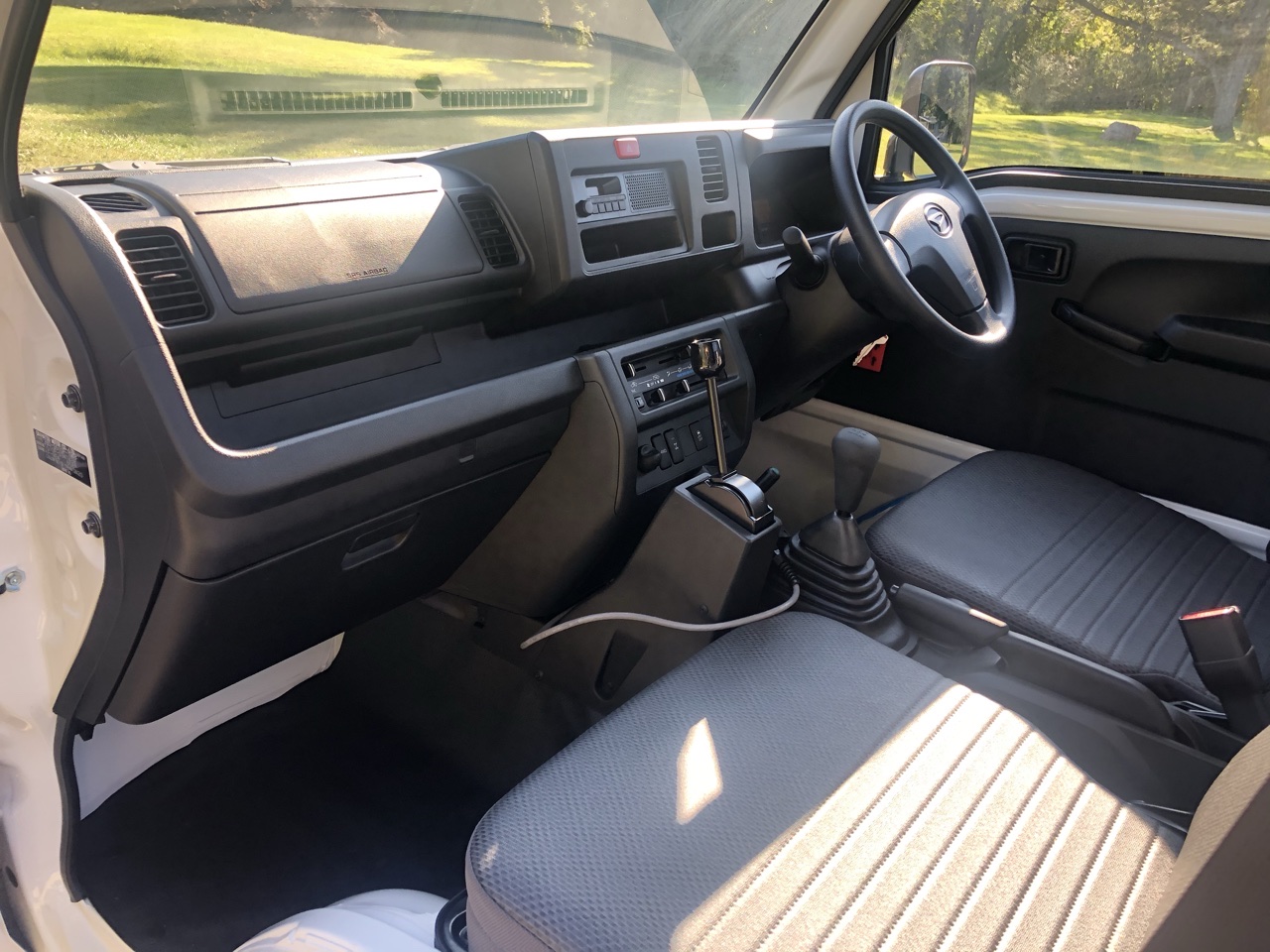 See the large lever between the gearshift and the dashboard? That's the lever to engage the PTO. Now, remember, this can only be done when the vehicle is at a standstill but, by channeling the engine power directly into raising the dump bed, you get a much more forceful lift. Plus, there's more control as the speed of lifting is correlated directly with the engine revs, so you can slow down and speed up the movement at will.

Let's wrap this up with a comparison table so you can better understand what your choices are when it comes to deciding whether to get an electro-hydraulic mechanism or a PTO mechanism.

So, we've come to the end of this page about Daihatsu Hijet dump models ... or have we? Well, we've gone through the standard model options -- the Low Dump and HD Dump -- as well as touching on the different choices for the powered dump bed tipping mechanism.

But we can't leave this page without at least touching on the ultra-rare Scissor Lift dump.

Now this is by no means a standard Daihatsu Hijet dump model, so you'll be lucky if you can find one at one of our dealers (click here to see), but if you really want one, you can still order one new, so contact us and we'll connect you with a dealer who can help you.

(If you're wondering where the rest of the information about these Daihatsu Hijet dump mini trucks has gotten to, remember that they are based on the same models that have the fixed beds. So, if you want to know more about features, transmissions, AC & heat, hi-lo range, rear locking diffs and more that we haven't gotten into here, head over to that page, and you will find the information there applies to the mini trucks here.)

Now, Hijet dump mini trucks are so incredibly versatile that they are one of the most popular models available used for sale here at Mini Truck Depot and if you want to buy an 11th generation Hijet dump literally brand new, we can do that too just click here.