Honda is one of the top names in the Japanese automotive world. Famous in the US for their #1 best-selling Civic, it's also famous in the world of motor racing, with their engines powering F1 world champions from Ayrton Senna to Max Verstappen. And they were not absent from the kei truck (Japanese mini truck) world either. In fact Honda's Acty had a 39 year and 4 month run as one of the main Japanese mini truck players. So what happened to this model from this iconic brand?

Honda Acty: How It All Ended

Let's take a different angle than usual and start at the end. Before looking at the Acty's history, let's answer the burning question of how a mini truck model that had been burned into the consciousness of the Japanese buying public for almost 40 years got to the point where it was axed.

There have been a number of things working against the Acty, but here are a few. First of all, the market for mini trucks in general has been contracting for years: Japan's population in general is in decline, but when it comes to rural areas, the drop has been precipitous. In particular, the number of people involved in agricultur has tanked by over 1/2 between 2000 and 2019. Not surprisingly, mini truck sales also dropped in tandem, with numbers sold plunging 34% in the same period.

Next you have a market that is increasingly sewn up by the two major players (Daihatsu and Suzuki), who also make white label versions of their Hijet and Carry models for the other major Japanese manufacturers. With slim profit margins, the only reason to be involved in such a market is to sell in quantity. And the Honda Acty just wasn't holding its own. With Daihatsu hitting around 80,000 units per year, and Suzuki selling around 60,000 (not counting their OEM rebadges), the Honda Acty's paltry 15,000 units lagged way behind.

With the last iteration of the Acty getting to the end of its life having been introduced in 2015, Honda was surely wondering whether it was going to be worth developing a newer one. A new model would have had to be future-proofed against new safety requirements, ever stricter fuel economy and emissions requirements, as well as the longer-term prospect of having to figure out electrification. It just couldn't be justified. 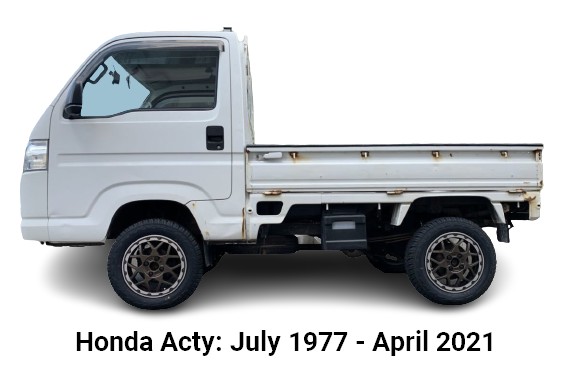 So the Acty is officially dead. RIP.

Now we've got that awkward fact out of the way, let's have a look at their final model in 4WD form - the HA9-type Honda Acty mini truck. Now, it's possible you're wondering what's the point of poking around an extinct mini truck. I mean, it may be all very fascinating for the mini truck geeks out there, but if it's dead, well what's the point?

If you're looking for a brand-new to-order Japanese mini truck then you're absolutely correct. But remember that these HA9 Actys were built right up until April 2021. That's not that long ago. So, if you're a Honda fan and would love to have a Honda mini truck, then a lightly used Acty is going to be totally within your reach.

That said, let's get into the facts and figures of this final generation 4x4 Honda Acty model. 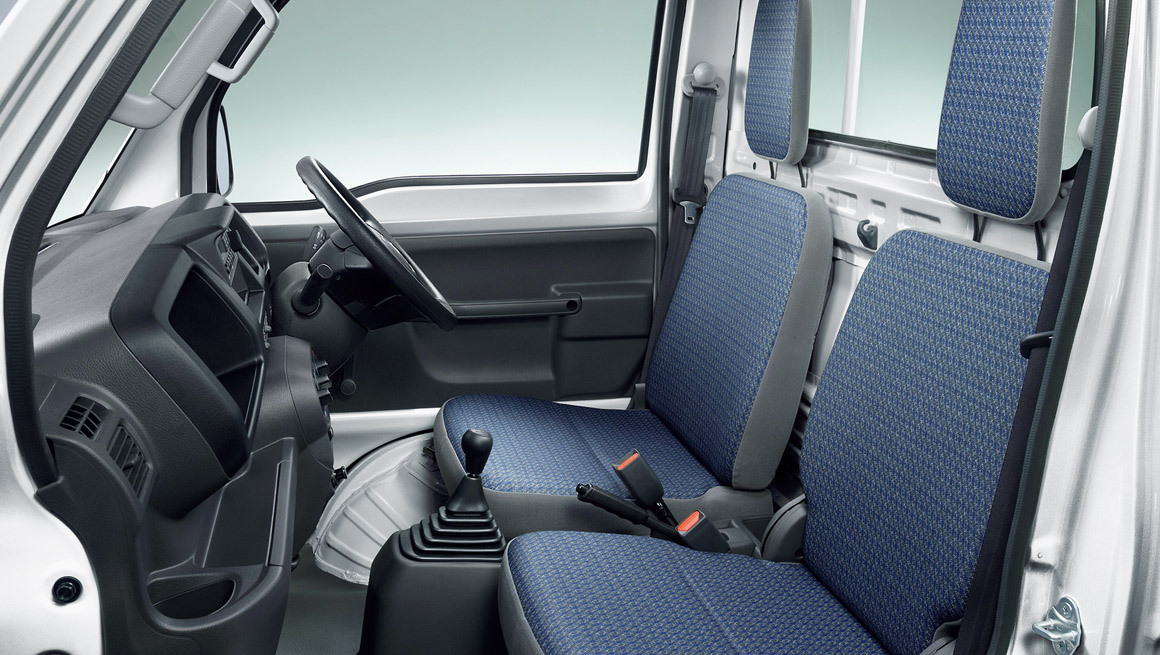 You're going to spend a lot of time in the cab of that Japanese mini truck, so you want to make sure it's a good place to be. And the Honda Acty doesn't disappoint. It may not have the flair of the latest model Daihatsu Hijets, but it's certainly comparable with the latest DA16T model Suzuki Carrys.

As you can see, you have two comfortable, yet hard-wearing seats with head restraints as well as seat belts for both driver and passenger. The interior is functional with tough gray and black plastic that's easy to wipe off and clean, so you don't need to worry about dragging dirt in on your work boots. All the controls are nicely to hand, and there are lots of useful storage areas, as well as cup holders for your beverage of choice.

If you are an eagle-eyed mini truck aficionado (and really paying attention), then you may well have noticed that those front wheel arches are set back much further in this Honda Acty than they are in the Hijet, for example. What does that mean for you? Well, wheel arches that are further back don't crowd the pedal area, making it less cramped. If you have particularly large feet and want a manual model, then having more space in the pedal area may work well for you.

The Acty, like many Japanese mini trucks, has a long load bed -- much longer than you will find in almost any UTV -- which can handle up to around 1700lbs. And you see how the sides fold down as well as the rear gate? That means much easier on- and off-loading.  Yes, you'll find this cool feature in Daihatsu Hijets and Suzuki Carrys as well, but it's just such a boon to anyone -- particular anyone with back issues -- there's every reason to bang on about it again.

You know what else this bed can do? It can dump. (Well, as long as it's fitted to the Dump model.) Check it out in action. This Honda Acty Dump is one of the hundreds of mini trucks we've sold over the years.

So your Honda Acty 4x4 mini truck can haul and it can dump, but also it just has a lot of amenities that make it a pleasant vehicle to use.

Unlike its rivals, the Hijet and Carry, the Acty's range of body colors was really quite limited. Perhaps this is one reason it couldn't compete. Of course, one of the colors was white -- that's just a given with these Japanese mini trucks -- which meant that there was only one genuine color choice. While this was an attractive blue, this just couldn't rival the khaki green metallic, orange metallic, navy blue metallic and other interesting body colors that Daihatsu and Suzuki use to give their mini trucks a really personal flavor.

(Both shown with original Japan-spec wheels and tires.)

Honda has always been renowned for its engines. After all, it's no accident that their engines have won Formula One championships over several decades, most recently with Red Bull in 2021. Of course, these Acty mini trucks are limited by rules that govern all kei trucks built in Japan (rules that seem to be even stricter than the rules of F1), so there's not a huge scope for engineering creativity. But let's get more into the details of the engine first, before we look at the different transmission options you could get in that final HA9-type 4WD Honda Acty.

The last Honda Actys were powered by the E07Z-type engine, which was a 3-cylinder water-cooled single overhead cam engine with electronic fuel injection. So you can already see a problem for Honda, which is probably another reason they shelved new models from 2021: This engine was more primitive than those of its rivals, having a single overhead cam, instead of dual overhead cams. A brand-new model would have meant a brand new engine as well. With such low production numbers, it didn't make sense.

Honda's engine is very slight smaller than those of its rivals (656cc versus 658cc, but there's no way you could feel such a tiny difference). It produced its maximum power at 5,500 rpm, but with max torque coming in at a lower 5,000 rpm. That torque peak in particular was relatively high in the Japanese mini truck world, giving it quite different pulling characteristics to its major rivals.

Since these engines are designed for road-going vehicles (although mini trucks are sold for off-road use only in the US under Federal law), they are built to the NVH (Noise Vibration Harshness) standards you would expect for such a vehicle. It's not something you will notice all the time, but a smooth, quiet engine isn't going to grate on your nerves so much when you're out and about working on your property all day.

Having said that, they are pretty easy to maintain. Need to fill up with gas? They take your normal regular gasoline. Need to replace air or oil filters? No problem, the parts are readily available and fitting them isn't difficult. Have particularly cold winters? Make sure you use anti-freeze just as you do with any of your other vehicles. These Hondas aren't some kind of thoroughbred supercar, so you'll find that maintenance isn't rocket science and you can do all the regular stuff yourself.

And where is that engine? Well, as you may have been able to guess from the body style, the engine is mounted low just below the seats (mid-engined, Honda says), giving your Acty an excellent low center of gravity, perfect for an off-road vehicle. The seats are easy to remove and, once you've done this, you have easy access to the engine if you need to change the oil or work on it. 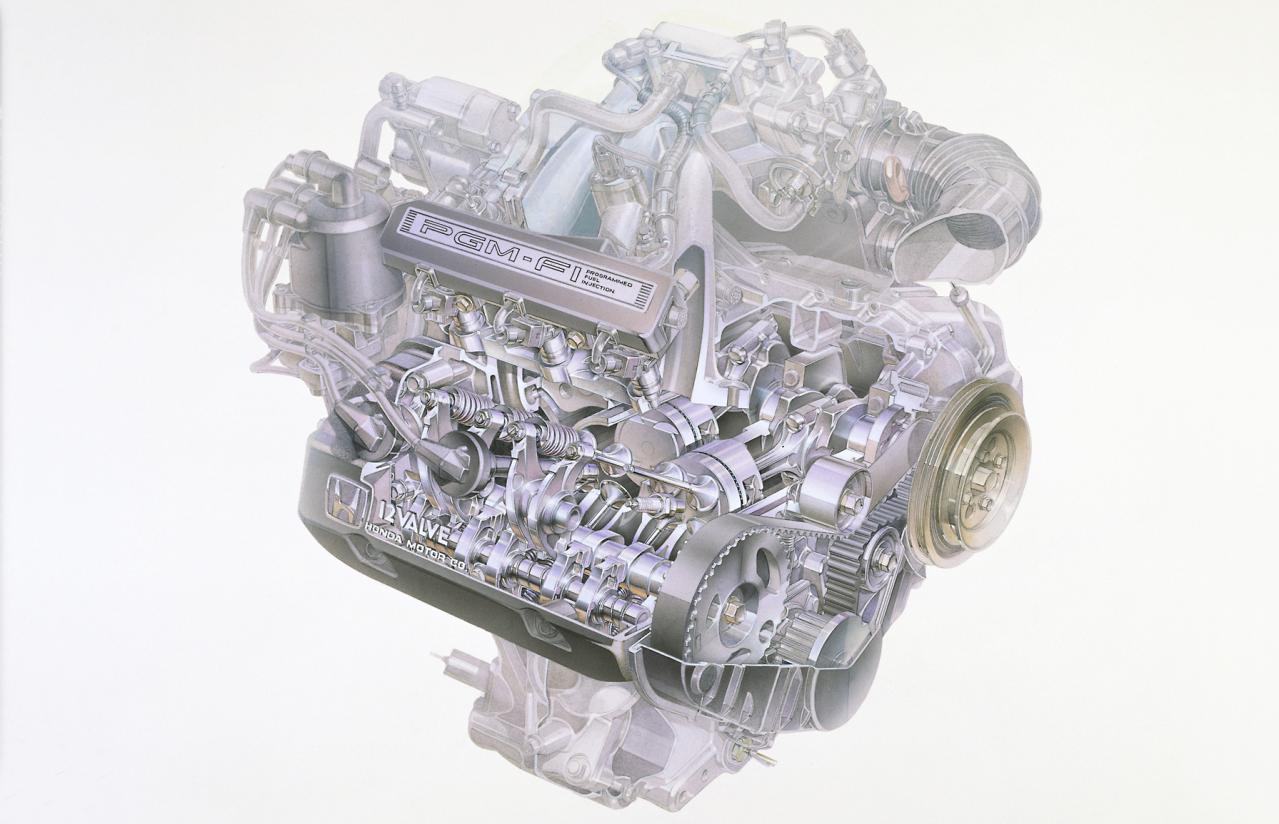 While Daihatsu has two different transmission options (automatic or manual), and Suzuki has three (automatic, manual, and an odd hybrid of these two called "5AGS"), Honda's Acty was only available with a manual transmission -- another significant disadvantage compared to its rivals.

As you can see below, the Attack gear shift packages those ultra-low range gears much more efficiently than the equivalent Hijet or Carry models do. There's no separate lever. The low-range forward gear is labeled "UL" and the low-range reverse gear is "UR" with both being able to be selected using the same gear lever as any other gears. 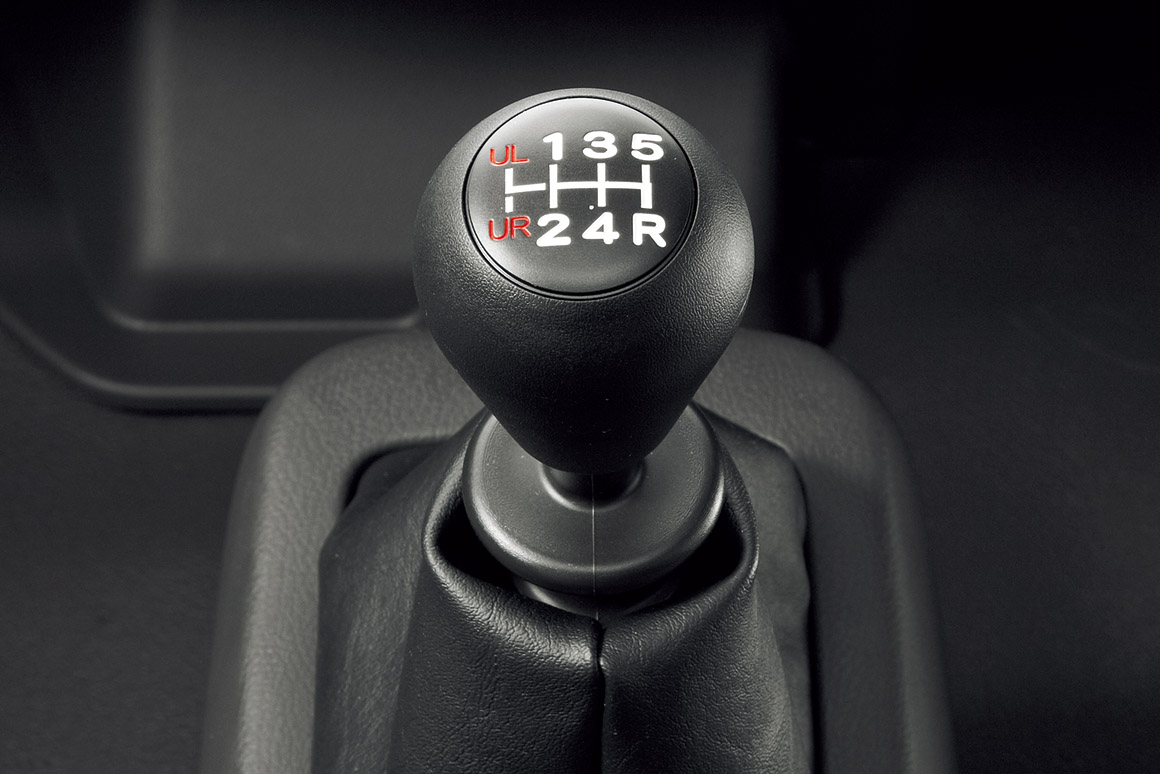 Let's not continue without reiterating that all the Japanese mini trucks for sale at our independent dealers are for off-road use only. So, they all have 4WD, even though 2WD mini trucks are sold in Japan. Just like the regular Suzuki Carry and Daihatsu Hijet pickup models, Honda Acty min trucks are also available in both 2WD and 4WD format, but if you want one in the US, then it's going to be a 4WD model for sure.

Just like the latest Daihatsu Hijets, Honda Actys had what they call "real time 4WD". That is to say, the system figures out when 4WD is needed and switches into that mode. If it's not, then it just keeps on cruising along in 2WD, which helps this Japanese mini truck achieve maximum fuel efficiency. After all, you don't want to be burning fuel to drive another set of wheels when it's not necessary.

Wait a minute ... there are (were) Honda Acty vans as well? Yes, just as Suzuki has the Every and Daihatsu has the Hijet Cargo, so Honda also had a van version of the Acty truck called ... the Acty Van. Yes, an inspired product naming strategy. This is why their marketing department is paid big bucks, I'm sure.

So, why not have a separate page all about the details of this Japanese mini van? Well, although the Acty truck was built up until 2021, the Acty Van was discontinued in July 2018. That's a pretty long time ago now. While that doesn't mean that you can't get a good used Honda Acty Van, it's probably better to go with one of those more popular rivals.

Here's what that Honda Acty Van looked like, for old times sake. 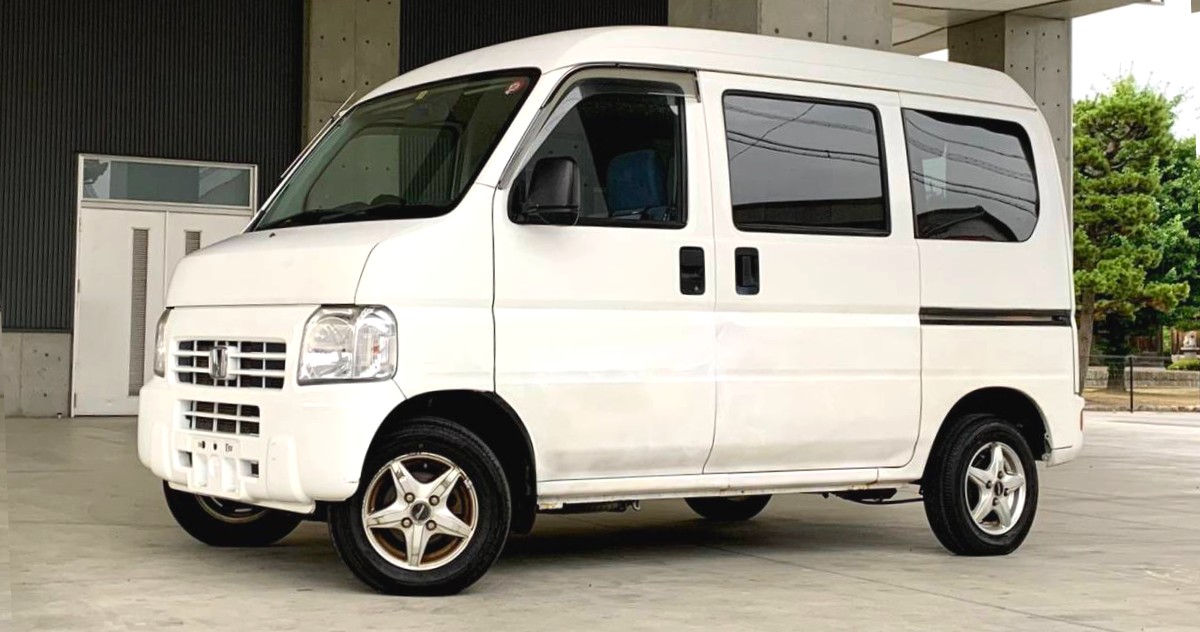 Honda Actys are pretty rare here in Mini Truck Depot in pickup form, and almost non-existent in van form. To be honest, Daihatsu Hijets seem to be the preferred Japanese mini truck option in the US, which is why you will find more of them for sale here. Suzuki Carrys and Everys are there, but definitely in second place. But if our mini truck dealers do have some Actys, you will be able to find them here. If you can't, and you really want to get a Honda Acty? Contact us and we'll connect you with a dealer from whom you can order one.