Japanese Mini Trucks In the USA

With a website full of mini trucks for sale across the USA, we can hardly talk about the history of Japanese mini trucks without answering the obvious question as to how these very niche Japanese vehicles have created such a following in the US.

How It Started: The First Japanese Mini Truck Imports

It’s not known exactly how it all began, but it’s very likely that the interest in these kei Japanese mini trucks began with military personnel serving on bases in Japan. They can’t have failed to notice these unusual machines rushing around the streets and back alleys of Tokyo and wondered what they were. Can you imagine what was going through their heads? Some would have thought they were just crazy or cute, but surely there were some who could see their potential in the US. But whatever their thoughts were, none of these military people did anything about them.

Then along came a serial entrepreneur named Malcolm Bricklin. Having successfully built up his family’s hardware store into a chain at 19, only to see it collapse under a weight of lawsuits, he turned his attention to an idea of creating a network of gas stations with rental scooters. In those days, Subaru was a scooter manufacturer, so he came to Japan to explore getting scooters from them. Instead, his attention was grabbed by Subaru’s 360 kei class vehicle, which was able to get 60 miles per gallon. His entrepreneurial brain clicked right away that this dinky vehicle with its exceptional fuel economy could find a niche in North America. Thus Subaru America was founded, with the first imports being these 360 models, which were also built in truck and van configurations as well.

Unfortunately, stricter impact safety rules in the US put an end to these imports in 1968, and things were dormant for a while until the 1990s when kei mini trucks began to trickle in once more, this time for off-road use on farms, ranches and other large properties, rather than on the road.

Check out this classic Subaru 360 truck. Can you see the model name "Sambar" on the hood? 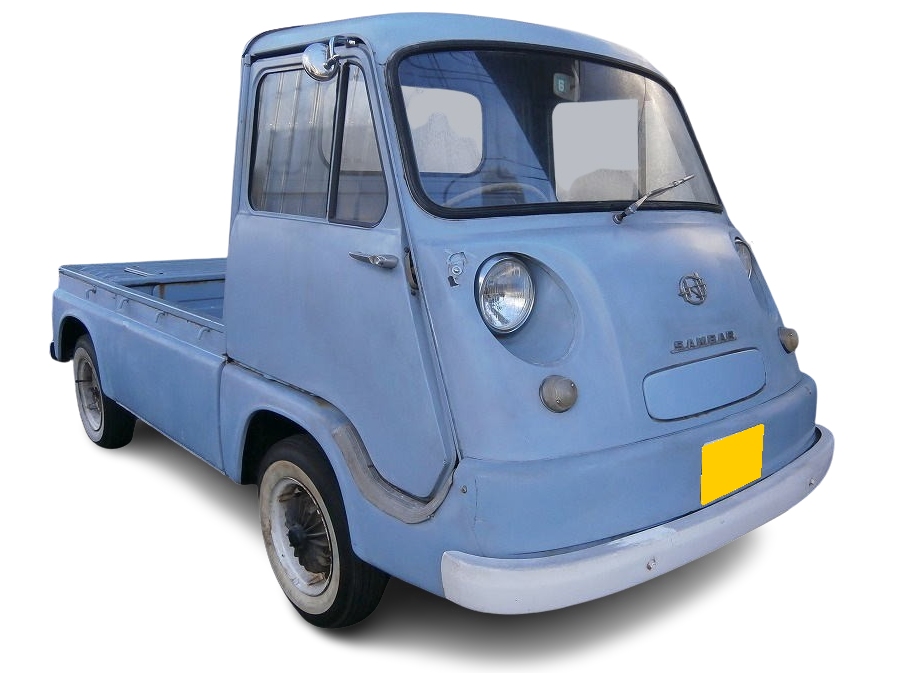 Exponential Growth… Then A Cliff

After these doldrums, imports accelerated rapidly in the early 2000s, with container loads of 6 or 7 mini trucks flowing in through ports around the US. And all was fun and games … until around 2008, when numbers dropped off a cliff.

The cause? Well, these small-time importers had assumed that simply by selling mini trucks for “off-road use only” they could bypass all the regulatory hurdles and do whatever they liked. Well, that didn’t work out so well. Sure, the DOT only pays attention to vehicles that are driven on the road, but they’re not the only governmental organization with jurisdiction. You see, there’s another department that’s interested in vehicles and all kinds of powered machinery, whether it has wheels and drives on the street or not – the EPA.

For many years, the numbers of mini trucks coming into the US simply hadn’t been at a level to really get on the EPA’s radar. After all, they have bigger fish to fry – major auto manufacturers shipping millions of vehicles each year. But with the exponential growth in imports getting to the many thousands per year, mini trucks tripped the threshold at which the EPA took notice. The issue was simple: The EPA didn’t care about the fact that these mini trucks were vehicles. But they did care very much about the internal combustion engines they contained. So the question on the EPA inspectors’ minds was simply this: Had these engines been emissions tested and approved? The answer was, no.

Boom! The EPA Cracks Down

This EPA crackdown was a sudden and major shock to the mini truck import market. Businesses that had been bringing in hundreds of kei trucks every year suddenly had the EPA breathing down their necks, and penalties / certification fees weighing heavily on their balance sheets. For almost all of them, the game was up. They folded and went out of business. It looked like the mini truck import market was basically dead. After all, who would want to risk getting on the wrong side of the Feds again?

Taking It Up To The Present Day

But, as you can see, here we are with our independent dealers selling hundreds of mini trucks each year. What gives? Well what’s different is that the team behind Mini Truck Depot has been able to draw on long experience importing vehicles from Japan (including as a DOT Registered Importer, and an EPA registered ICI) to make sure that every single mini truck for sale here at MiniTruckDepot.com is certified fully compliant with all Federal laws – EPA, DOT and more.

So, if you’re looking for a fully-compliant UTV-beating off-road mini truck for your off-road application in the US, check out the mini trucks our independent dealers have for sale right here.