Mazda was a player in the Japanese mini truck wars in the early days. Up until 1989 it fielded a truck model call the Porter Cab that, in its second generation at least, had an incredibly cute wide-eyed design, as you can see below. 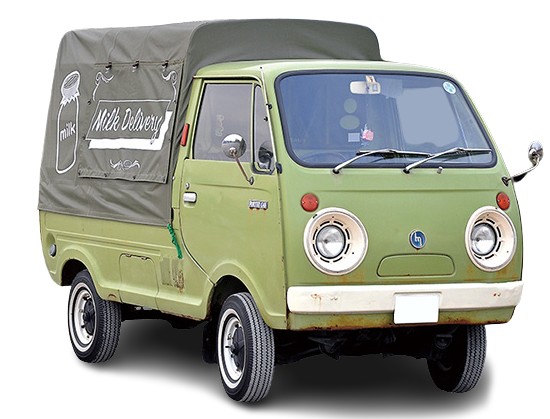 While other manufacturers like Mitsubishi and Subaru kept on soldiering on in their quest for dominance in the Japanese mini truck market, only giving up and going down the OEM rebadge route well into the 2000s, Mazda seems to have realized pretty early on that as a small manufacturer, they really needed to concentrate their resources on their main product lines and not spread themselves too thinly.

By 1989 it was clear that the Porter and Porter Cab were long overdue for replacement. However, instead of making their own new mini truck model, Mazda reached out to Suzuki and partnered with them to sell one as an OEM rebadge of the Carry and Every. So it's interesting that the Scrum badge has never actually had any distinct history of its own -- it has only ever been a rebadge of Suzuki products.

Subaru Sambars are very rare here at Mini Truck Depot. To be honest, the 6th generation ones that were the final independently developed models are getting pretty old now, and then if you want a post-2012 one, then why not get a Daihatsu Hijiet because they're basically identical. Still really want to get your hands on a Subaru Sambar? See if we currently have any Subaru Sambar mini trucks for sale here, or contact us and we'll connect you with a dealer who can help you source one.