Outside Japan, thoughts of Nissan are most likely to be associated with the supercar-slaying GT-R, the first real mass production electric car in the world (the Leaf), or the downfall and bizarre escape from Japan of Nissan's flamboyant former CEO, Carlos Ghosn. All of this gives somewhat of a larger-than-life feel to this Japanese automaker that has a surprisingly small market share in its native country. This goes completely against the normal Japanese pattern of being strong at home, and using that strength to project into foreign markets.

Just take a look at 2021's Japan market sales figures: Number 1 is Toyota, unsurprisingly. But Nissan? They're way down at #5. Even more surprising are the 2 manufacturers that beat Nissan in this Japan market ranking -- Suzuki at #2, and Daihatsu at #4. That's right, these brands that have little or no presence outside of Japan are beating Nissan to hold two of the top 4 slots in Japan. And why? Well, if you've looked around Mini Truck Depot a little, you may well have guessed -- they're both major players in Japan's unique kei ("mini") vehicle market. Daihatsu's Hijet is the #1 mini truck, with Suzuki's Carry coming in at #2. (Then there are all of their kei cars as well, but they're outside the scope of this Japanese mini truck-focused website.)

Now, Nissan is a major player outside of Japan, but it must sting to be beaten by these smaller companies at home. However, this hasn't lead to Nissan developing their own mini truck competitor. Presumably they either don't want the distraction, or the competition and thin margins just make it too much of a stretch.

Not as quick to the OEM rebadge market as Mazda, Nissan was still relatively early in entering the mini truck market through the badge engineering route back in 2003. Interestingly, Nissan's chosen partner wasn't the reigning sales champ of the time (Suzuki), nor the hard-charging Daihatsu. Instead they picked out lesser-known Mitsubishi to have them rebadge their Minicab with the newly minted "Clipper" nameplate. So, a rather surprising choice, at least from Nissan's point of view. Of course, it made a lot more sense for Mitsubishi, as it would add production numbers under this new badge to a struggling model.

Here's an example of one of these older Nissan Clippers that was sold by one of our independent mini truck dealers. 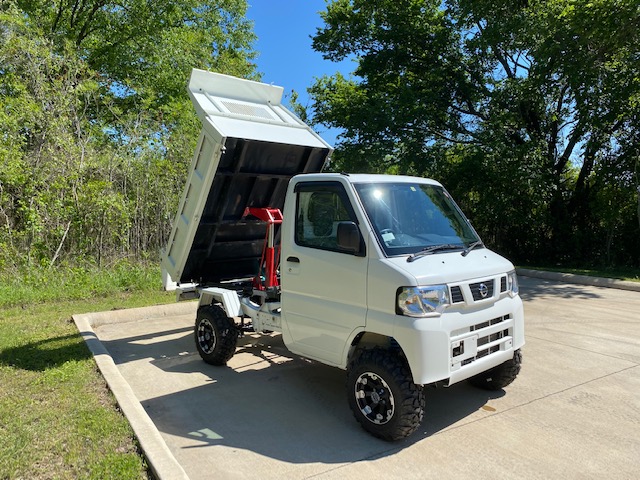 By 2013, this first generation model was becoming long in the tooth and it was time for a replacement. It was at this point that Nissan's decision to choose also ran Mitsubishi came unraveled. You see, Mitsubishi itself had run out of steam trying to develop and sell its own mini trucks, and had made the decision to go the rebadge route as well.

Nissan had no choice but to find a new partner. Since Nissan had already aligned itself with Mitsubishi and Renault at a corporate level, there was not open door to join Toyota in getting rebadged Daihatsu Hijets. There was really only one option on the table: Suzuki. So, from December 2013, the second generation Nissan Clipper trucks and vans hit the market, based on the DA16T and DA16V Suzuki Carry and Suzuki Every models.

Our mini truck dealers occasionally sell some of these second-generation Nissan Clippers as well. Here's a typical example: 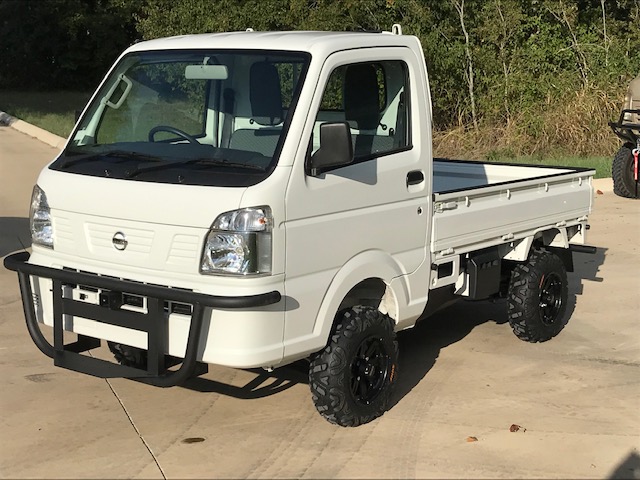 Now, since Mini Truck Depot is the home of off-road use Japanese mini trucks, you can be sure that the Nissan Clipper models you find here are all 4WD. There are two main transmission choices -- 5-speed manual, or 3-speed automatic -- but there is also a "Farming package" manual transmission for the truck that has the additional ultra-low range for extra off road ability.  You can see more details about these transmission choices on the main Suzuki Carry page here.

Finally, as you can see in the photos above, the Nissan Clipper Truck models are also available with dumping beds -- just like their Suzuki counterparts, which you can read more about here.

As you may well have seen, there are the occasional Nissan Clippers for sale here at Mini Truck Depot. But if you're looking for an almost-new or lightly used Japanese mini truck of this model, you're going to have a lot more choice if you settle for the Suzuki Carry or Suzuki Every counterpart, rather than holding out for a Nissan Clipper in particular. You'll even find that the original Suzuki models have a greater range of color choices as well. If you still really want a Nissan in particular, our dealers can definitely source one for you, but unless you have some overwhelming desire to have that Nissan badge, there really isn't much of a reason to hold out for one.

Desperate to get your hands on a Nissan Clipper Japanese mini truck? See if we currently have any Nissan mini trucks for sale here, or contact us and we'll connect you with a dealer who can help you source one.