Mini Truck Depot has a massive selection of used, nearly new and brand new Japanese mini trucks for sale -- and you can even order a brand new mini truck to your exact specification if you want. And yet, pretty quickly you'll notice that even the oldest mini trucks our independent dealers have for sale are no more than around 10 years old -- with most are quite a bit younger than that.

At the same time, it's possible you've come here after researching Japanese mini trucks on other websites and noticed that they have very old (over 25 years old) used models for sale, so perhaps you've wondered why you can't find any that ancient here at Mini Truck Depot. After all, Mini Truck Depot is well-known as the Autotrader of the mini truck world with more mini trucks for sale here than you'll find on any other similar website.

So what's the deal? Why can't you find 25-year-old and older Japanese mini trucks for sale here?

(Well, first of all, they're pretty ugly and almost all boring white. But if you can get over that, there are still some really solid reasons to steer clear of them ...) 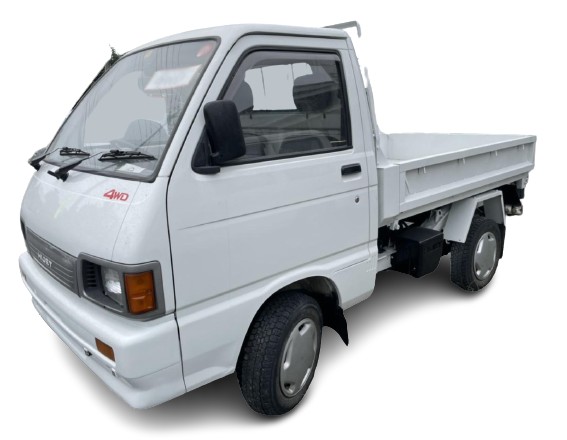 Let me ask you something: As a farmer, a rancher, a municipality, a college or whatever role you have, would you consider buying a quarter-century-old piece of machinery to do an important job for you?

Let's say you're a rancher. It's an ice-cold morning, but you need to get feed out to the cattle. You want to load up, jump in, and drive off without a second thought. Or you work for a municipality and the streets need plowing. You need to jump in, drive off and get that snow moved without worrying about whether your mini truck's going to start or not. Or you work for a college -- rain's hammering down and you need to haul some sound equipment over to another building to set up for a presentation starting in an hour. Do you want to be over-doing the clutch and flooding the engine on your ancient carburetored mini truck while the students sit their tapping there fingers and wondering what their expensive tuition is being spent on?

Of course, the answer to all of these questions is no.

You have work to do -- you need a tool. But not an old, rusty tool that has had most of its life driven out of it in Japan. You know that the best tools are the ones you don't need to even think about. They're there, ready, when you need a job done. They do the job just as you need it done, without compromise. And they require as little maintenance as possible to keep them ready for the next time.

On all these levels, it's pretty clear that an ancient Japanese mini truck that's already at least a quarter century old, and likely has high mileage as well, is not going to be that kind of reliable tool you need.

Notice that's "ancient" and not just "old". A 10-year-old Japanese mini truck is getting old, but if one of our dealers sell you one in great shape with low mileage, you certainly won't be thinking it's ancient at all.

But older than 25-year-old mini trucks? Yep, those aren't just old, they're ancient. Think about it: You might get your kid an old used car for their first vehicle, but there's no way you'd get them something ancient. You know you'd be getting a call every other day from your kid who's stranded on the side of the road because something or other has failed. Again.

These Japanese mini trucks you're seeing for sale that are over 25 years old? They're ancient. And to keep them running takes effort. A lot of regular effort. But even then, it doesn't mean they won't give out on you just when you need them.

And even if you're willing to put in the hours just to keep your mini truck trucking, you can't do anything with those hours if you can't get parts. Now that can be a real problem. No parts means overnight your ancient mini truck has become a worthless hulk cluttering up your property. You think Americans are obsessed with the latest new thing? That's nothing. The Japanese are worse. They get through their cars so quickly, there's a huge industry exporting used ones (about 1 million per year) around the world to sell in less well-off countries because used car lots in Japan just can't sell them on to local buyers -- they just aren't interested.

So if you have a Japanese mini truck that's at least 25 years old (and getting older all the time), the fact is that there are almost no models of that ancient vintage left running in Japan. With almost none left on the roads in Japan, why would the manufacturers keep on making parts? And why would the dealers or mechanics shops keep on stocking those parts? There's just no money in it. No parts in Japan means no parts for you to buy to keep your mini truck working. Of course, it's not like there will be literally nothing available for your particular model (until it transitions from "ancient" to "pre-historic" anyway), but its going to be roulette every time seeing whether you can get that crucial part you need.

If you can get it, great. But if you can't? Well that's game over. That's the end of your mini truck. You know it's coming, but you don't know when. Sure, you could have several years use out of it. Maybe. But what if something breaks the week after you get it, and then you can't get the part you need? That's the end of that.

This is not a problem you are going to have with a Japanese mini truck bought from one of our independent dealers. Well, not for many, many years. Not until that mini truck becomes ancient as well. But by that time you will have had maybe a couple of decades or more hard use out of it. And, since it's a tool, not a toy, you'll be ready to get another one to replace it, rather than just trying to keep it patched together.

The verdict's in, but let's break it down: An ancient (over 25-year-old) Japanese mini truck is only going to be the right buy if ...

But if this isn't you. If you're looking to invest in a tool that's going to be a reliable workhorse for many years to come, then the lightly used, nearly new or brand-new mini trucks here at Mini Truck Depot are going to be a much better investment of your hard-earned dollars by far.